An Honest Review of The Pink Panther Flower Strain

Pink Panther was an animated series popularized during the late 1960s until the 90s and then had a resurgence again in 2010. It was a beloved and established show about a neon pink panther and it has somehow captivated the hearts of the young and old alike. That brief history lesson has nothing to do with this cannabis strain except that the buds turn pink during harvest season. But it’s worth the narrative to know the origin of its name.

A Sativa dominant hybrid, Pink Panther gives an upbeat high characteristic of its Sativa roots and a relaxed mind from its Indica side. It is a good option for social gatherings or any event that would enjoy an energy boost. It is great for daytime use and may even be considered as a good alternative for coffee. Its hybrid qualities make it a strain that can be used at any time of the day.

Origins of the Pink Panther Strain

There have been a few presumptions on the real lineage of the Pink Panther. Some say it is essentially Etta Seeds’ Pink Plant. But at the moment, one known company who cultivates the strain released tidbits of their concoction. Staykeyed Seeds from Oregon bred the strain by using Pink Plant from Eva Female Seeds in Spain.

They were able to create this hybrid from Pink Plant, African Sativa and Hindu Kush. They then cross-bred the resulting hybrid with Original Haze and a mystery OG Kush. The exact genetics remains to be a secret. The resultant strain has a characteristic immediate first between the eyes. This is said to help ease headaches.

The resulting strain, Pink Panther has multiple benefits owing to its well-balanced Indica and Sativa characteristics. It does not carry the usual jumpy feeling and racing thoughts that Sativa-dominant strains commonly create. The masterful combination of its parent strains allows for an easy and collected high. 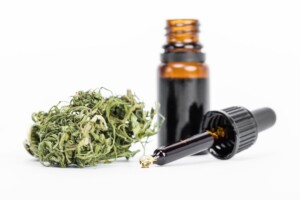 Pink Panther gives off an aroma that is as sweet and fruity as its color. It gives off a striking fruity scent of pear, mango, and berries with a pine aroma, too. Many liken its scent to candy. Those with a sweet tooth may thoroughly enjoy this strain. As the initial selling point, many are drawn to this attribute uniquely seen in this strain. Its smoke is not too thick as it lets the aroma fill the room.

It entices most users by the delightful sensation it gives upon smelling the nugs. Its same pleasant aroma is almost the same taste expected from the buds. It is enjoyable because of its exquisite flavor of sweet and hazy pine combined. Upon exhalation, it leaves an orange, grapefruit taste in the tongue and throat.

One of the striking qualities this plant has is its peculiar color. It is a mixture of light green and purple with its buds covered with light brown and orange hairs all over. The closer it gets to harvest time, the purple nugs become pinker. Thus, getting its name, Pink Panther.

Pink Panther is a relatively easy marijuana to grow. It can be grown indoors or outdoors but its breeders suggest the latter arrangement for better quality yield. This setup can allow the plant to grow freely, reaching heights of up to 10 feet tall. Its cultivation is much like any other Sativa and it has very good resistance to mold and mites.

A point of concern in growing Pink Panther is its pungent odor. The aroma is extremely powerful and it might not be to the pleasure of most neighbors to smell it. In this case, it can be considered cultivating the plant indoors and use activated charcoal to minimize the scent. In this indoor layout, the plant is expected to have a flowering period of 8 to 10 weeks with a yield of 10 to 12 ounces per square meter.

When grown outdoors with plenty of sunshine, it is expected to flower by early October with a yield of 12 ounces. As with all cannabis plants, gentleness and care is key. Humidity is its enemy, and a dry, sunny, environment is vital.

Most users initially comment on Pink Panther’s smell and taste. Reviews state that while its “yummy” aroma and flavor is noticed first, its hard-hitting high is everything expected and more. Its effects are fast acting and the cerebral high is felt almost immediately. The most common “first hit” is almost always felt in between the eyes and the effects slowly trickle down the rest of the body.

The potency of this strain is clear in the initial hard-hitting buzz but relaxes into an uplifting euphoria. The smooth energy starts from the head and travels down to the body. It has all the Sativa goodness without the excess jitters and energy. It releases a positive and fun mood that is equally suited for social gatherings or recreational alone time.

It piques creativity and focus during the high. Pink Panther can enhance any activity that involves imagination. Writing, playing an instrument, composing songs, making art, these talents are somehow enhanced with the high. The Sativa allows for optimism, great for time spent with friends. It regulates mood and gives just the right boost in energy that is perfect or outdoor fun.

Its Indica heritage gives a relaxing effect that helps ease restlessness. It is said to help in a few body aches and may also be an aid to those having trouble sleeping. Because it can relax the mind and body, it can calm down the senses. This helps in kicking back and winding down. However, this does not mean it renders sleepiness. It gives relaxation that can help in carrying the user to dreamland. 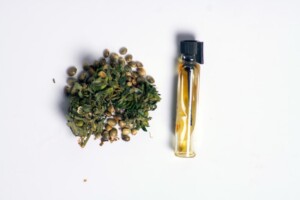 Because Pink Panther is a potent strain, it is not recommended for novice users who may accidentally smoke too much. Newbies who get overly excited by the aroma, taste, and overall experience may get bouts of paranoia if it is taken at high doses.

Other than that reminder, Pink Panther is an overall great strain that can be taken at any time of the day.

In the morning, it can be an alternative to morning coffee as a wake and bake strain without the jitters and stomach irritation. It promotes productivity and concentration. For a full day of work, this helps in accomplishing goals. In the afternoon, it’s an amazing energy booster. When there’s still a lot to do and the energy meter dips, Pink Panther can give enough buzz to help finish tasks. At night, it calms the thoughts.

It is great for socializing or alone time. For activities that involve liveliness and zest like outdoor fun or concerts, a Sativa strain can get the job done. Pink Panther is an all-around great strain. Introverts or extroverts can enjoy its effects for varying activities.

If you haven’t tried it or if you’re still doubtful, it’s sweet candy flavor and aroma should be temptation enough! Imagine your favorite tropical drink in cannabis form, that’s Pink Panther. With a plethora of effects that can take you from morning until nighttime, the whole experience takes you to work, fun time, and relaxation at home.