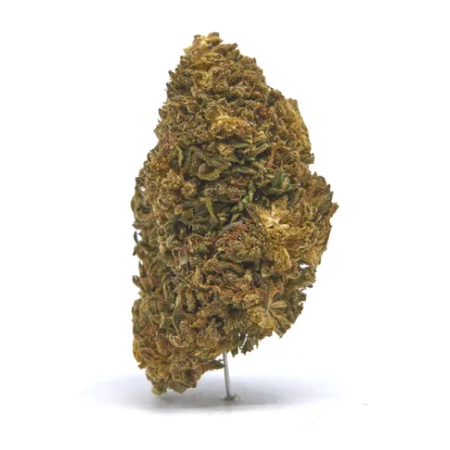 The descendant of two classics, Sour Diesel is a legendary cultivar that unites the overpowering bitterness of gasoline with the lip-smacking tingle of sour citrus. The iconic herb has itself parented quite a number of strains, thanks to its premium genetics and distinct effects that make it a favorite among farmers hoping to cultivate the hemp industry’s next big hit.

Fast acting and potent, the Sour Diesel strain delivers effects that may overwhelm your system with the quintessential benefits of a sativa strain. That is, potential hard-hitting, show-stopping, body-lifting wakefulness that may support energy, productivity, motivation, and creativity.

Sour Diesel is often considered one of the most essential hemp strains on the market. Any hemp connoisseur would tell you that Sour Diesel is a must-try for any and everyone who claims to appreciate the benefits of the herb. For the most part, the strain pays its popularity to the reputation of its parents – Chemdog 91 and Super Skunk. These hemp legends pushed the Sour Diesel strain’s reputation over the top, lending unprecedented genetics that made its offspring the hemp success it is today.

Chemdog 91 is a mysterious strain that is believed to have first appeared on the market in 1991. The cultivar of unknown origins delivers a pungent, skunky aroma laced with hard notes of gasoline. These properties are heavily represented in the Sour Diesel herb, with its flavor profile resembling the Chemdog 91 strain almost entirely.

Super Skunk on the other hand, is a strain that gets its name for obvious reasons. The ultra skunky cultivar boasts a fragrance (or odor, depending on your tolerance) that can knock your olfactories out of the park. But despite its offensive aroma, the strain delivers a pleasantly surprising, delicate sweetness that covers the tongue in tingly honey-like goodness.

First impressions of the Sour Diesel strain might leave you underwhelmed. After all, it’s just a nug of green, with other greenish hues coursing through the interior to create a monochromatic palette of grassy shades. Over the exterior, strawberry blond hairs entangle the leaves in a network of yellow tendrils that are dusted in a frosty coating of sugary trichomes. Other than that though, there’s not much else to see with the cultivar. But for what it lacks in terms of color, it makes up for with its scent.

With both parents demonstrating incredibly pungent fragrances, it’s no wonder how Sour Diesel gets its peculiar aroma. The strangely scented strain comes at your olfactories like a freight train of skunk. Offensive and overwhelming, some users claim to detect notes of sharp cheese that intertwine with gasoline on top of the skunky odor to give you a hemp experience worth remembering.

First things first – Sour Diesel doesn’t joke around when it comes to flavor. The ultra-potent taste contained in the strain’s smoke can easily overwhelm novices and low tolerance users. So let this serve as a fair warning – Sour Diesel will f*ck your sh*t up, starting from the way it tastes. To put things plainly, the strain delivers flavor that resembles its odor almost exactly. That is, loads of skunk with strong jabs of gasoline.

In between the compelling tidal waves of pungent flavor, waves of sour citrus shine through to break the skunk. The delicate notes are enough to add pleasure, and make the entire experience a truly dynamic and interesting flavor encounter.

Another thing that makes Sour Diesel particularly captivating is its fast acting impact. The effects take a hold of your system just minutes after taking a toke, delivering high-flying sativa-leaning benefits that stir the senses and awaken your vigor. In many ways the strain might be said to unleash your inhibitions, potentially making you feel more bold, daring, and confident.

Able to potentially ease away those physical and cognitive discomforts, the Sour Diesel strain pumps your system with extra loads of energy to potentially give you the power and motivation to see you through a day’s worth of work and responsibilities. A fair warning though – Sour Diesel doesn’t play around. Make sure you’ve got the tolerance for heavy handed sativa effects and potent flavor before you take a toke of this monster strain.

Although moderately difficult for first timer growers, the Sour Diesel strain’s specific genetics make it a strong choice for those who want hard-hitting effects with minimal effort. Strains with more specific growing needs tend to be far better for extraction, producing more potent full spectrum concentrates for higher quality hemp products. So despite the moderate difficulty of growing Sour Diesel, it does payback with supreme hemp that’s perfect for a range of post-harvest processes.

Sour Diesel flowers in about 11 weeks, give or take a week. The moderate yield rests at a maximum of 3 ounces for every foot of height that the plant grows. At most, you can expect your herb to stretch over 7 feet, which makes it relatively taller than most other varieties.

Because of its space needs, growing the plant outdoors might be ideal especially if you’re working with limited room. But indoor conditions can be suitable for Sour Diesel as well, as long as you supply enough heat, light, and low humidity. Providing phosphorous-rich supplements towards the end of its growing period and ceasing the provision of water around 3 days before harvest should produce gut-wrenching, pungent odor and a rich trichome layer for an excellent trip.

Sour Diesel’s intense flavor and monstrous effects mean that not everyone will enjoy the experience that it serves. Low tolerance users and beginners might be overwhelmed not only by its incredible taste but also by its overpowering effects that might make some feel anxious and fidgety.

Nonetheless, Sour Diesel remains one of the most legendary strains for veterans and purists who enjoy hard-hitting hemp. Those with more experience may enjoy the rumbling sensation of unprecedented energy flow coursing through their system, potentially giving the power, motivation, and mind-set to finish a day’s worth of responsibilities – and more.