From just its name, there’s a lot that you can already assume about the Pre-98 Bubba Kush. This herb rose to popularity when MMMBop was all the rage, and the fear of the Millennium Bug was all that was in the paper. So yeah, it was a pretty weird time. Nonetheless, the Pre-89 Bubba Kush retains its relevance to this very day, having earned itself a rightful place in the top-shelf where it stays trendy even in the 21st century.

With that vintage 90s taste and fragrance, this cultivar shoots through the system with a jolt of pepper and awakening lemon. Underneath, tones of coffee and musk cradle the delicate citrus fruit flavors, giving it a really grungy taste that encapsulates the typical cannabis cultivar of the pre-millenium market. When it comes to effects, it’s no less of a classic. Combining happiness, sleepiness, and hunger, this strain can get you flashing back to those simpler days when you’d laugh to Wayne’s World on your mom’s sofa.

The Origins of the Pre-98 Bubba Kush Cannabis Strain

Who knows, man? The thing about the Pre-98 Bubba Kush herb is it just entered the market. No fanfare, no introductions, it was just suddenly there. Who are its parents? Who bred the stuff? Beats us. But what people of the era will tell you is that when this stuff hit the market, it’s all anyone could talk about. That said, there have been a few people who have tried to decode its roots just for the sake of finding out where it comes from.

What some experts assume is that it comes from the OG Kush lineage, given its name. Some even suspect that the strain is a phenotype of the OG Kush herb. But because its a solid indica, and the OG is a hybrid, it would have had to take some serious isolation to get full on indica expression without tossing an indica parent into the mix. With that in mind, it makes more sense to assume that it might have come directly from the Bubba Kush family tree.

With identical flavor and aroma, the Pre-98 Bubba Kush and Bubba Kush are almost identical. Both indica leaning herbs, the only real difference between the two is that the Pre-98 version is a little more happy, and slightly less sleepy. Overall though, they both give pretty much the same effects once imbued into the bloodstream. 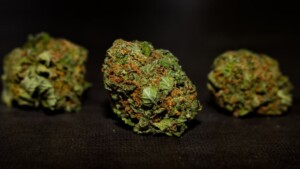 Pre-98 Bubba Kush has some real grimestar appeal to its look. Like it was picked out of the backpocket of some 90’s indie rock band drummer who hasn’t showered in a month, this stuff looks stale and dusty. Covered in a dusty kief-like material, this stuff really doesn’t scream pristine or polished the same way that other dreamy, whimsical, multi-colored herbs do. On top of that, the nugs are pretty small compared to other herbs, so the stunted growth might throw off a less experienced buyer.

On the upside, the Pre-98 Bubba Kush makes up for its lack of size and poise with its dense blanket of trichomes. It was customary for herbs bred in the 90’s to have aggressive trichome expression. Maybe it was something about the cultivation practices of the time, or the genetic properties of the herbs that were popular during that time. Whatever the reason, these herbs had some of the most eye-popping trichome layers that made them the subject of many connoisseurs exploration and discovery. That said, you would expect that the Pre-98 herb lets off a pretty strong aroma, and it does.

With strong citrus and pepper overtones, the initial punch of fragrance really clears out the sinuses. Reaching straight into your nostrils, the potent aromatic facade can linger for a few seconds before that undertone punches through. Piercing the smells of citrus and pepper, a deep bitter chocolate note underlines the experience, coming hand in hand with the scent of burning wood and earthy musk that might make a novice pull his nose away.

Like any classic 90’s herb, the Pre-98 Bubba Kush variety really traces the throat with its smoke. The sharp texture can cut through the soft tissues as it passes into the lungs, activating a novice’s cough response. For a veteran however, the vintage feel can be a wonderful reminder of how strains used to be before all of those fancy fruity floral varieties were introduced into the market.

The first wave of effects that the Pre-98 delivers focuses more on removing clutter. The sensation is calm and relaxed, but the cognition is mostly left intact. During this initial crash, discomfort is lifted from the physical body and worries are erased from the mind. In essence, you’re given a clean slate under a state where you might not be fully able to grasp a thought for too long.

Then of course, the second wave comes crashing. The other half of the experience is characterized by a sense of happiness that resonates from deep within the chest. A smiley, giggly disposition becomes your primary mood, and everything just seems like its worth laughing about. Then, as your breathing slows and your eyelids become heavy, the strain delivers a pang of hunger that awakens the urge to purge the body with whatever you can get your hands on. Make sure your pantry is stocked before you take that first toke. 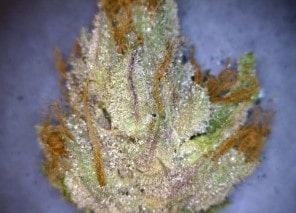 An herb that thrives best in the hands of a moderately experienced farmer, the Pre-98 Bubba Kush will call for some knowledge in hemp cultivation. With that in mind, it might be best to grow the herb indoors where you have a better chance of tweaking and adjusting all of the little details that could impact its growth. Fortunately, it only grows to about 3 feet at best, which makes it a really convenient commodity for indoor growth.

Despite its height though, the plant will yield around 5 to 6 ounces of bud for every square foot of its size. Growth takes around 10 weeks however, which might be slightly long to wait especially if you were hoping to harvest more than just once a year.

The Pre-98 Bubba Kush cultivar is a really fun herb that can bring a veteran straight down into memory lane. The herb’s classic properties – from its taste to its effects – are characteristic of the vintage varieties that were popular during its time. And because its flavor and texture don’t make it too easy, cannabis connoisseurs who know how to enjoy the unpleasant aspects of the miracle herb might find this variety to be especially enjoyable.