The Paris OG Strain is one of the standout strains of the last decade. Having won first place during the 2014 Michigan High Cannabis Cup, the Paris OG has garnered for itself a strong following as one of the best strains in recent times. Packed with flavor and brimming with relaxing effects, Paris OG can take you straight to paradise with its distinct flavor and interesting blend of soothing effects.

Paris OG is an amalgamation of the very best strains in the cannabis market. It’s no surprise how this award-winning strain is the offspring of cannabis heavy-hitters that have come before it. Paris OG has been widely regarded to have come from mixing the Headband and Lemon OG. However, many experts have come forward to contest this claim is there is no solid evidence to confirm this information.

Nevertheless, many still pay homage to the star strains the Paris OG allegedly owes its success to. One of them is the Headband. This indica-leaning hybrid gets its name from its strong heady high accompanied by a distinct tingling sensation over the head. The distribution of this sensation is localized to the area of the forehead and around it, resembling the placement of a sports headband worn by athletes.

The other parent, the Lemon OG, is no slouch either. This is also a hybrid strain with a 60/40 distribution of indica and sativa respectively. Lemon OG won multiple awards in its famous runs during the year 2004 and up to 2005. It is considered one of the most lemon-themed strains in the market and rose to prominences because of that. Add to the fact that it’s a quick-acting and relaxing strain, this is a winner cannabis.

Paris OG has an attractive appearance to it. A short and shrubby plant overall, its dark green leaves are surrounded by bright orange to dark brown pistils. It possesses large, dense buds collected in clusters. What’s exciting from its appearance is the abundant collection of a thick resinous trichome jacket surrounding the buds. This represents its potent cannabinoid goodness within the buds.

What is even more alluring is the aroma of the Paris OG which is arguably one of the more unique experiences in any cannabis strain in the market right now. From the outset, Paris OG greets you a citrus and fruity smell akin to a trip to the floral and lemon gardens. Shortly after, your discerning olfactory senses may even pick up the small hints of diesel, pine, and earth-like aromas that round out its smell.

The aromas transition nicely into the flavor of the Paris OG. Upon the inhale, your taste buds are treated to a nice mix of sweet citrus flavor that overloads your tongue. As the flavors start to tingle, you start to appreciate the deep flavors of blueberry and pine in this winning strain. Overall, the experience of the Paris OG is one of the senses that competes with the very best that the market has to offer.

The Paris OG will not have come to its world-renown status if not for its amazing slew of beneficial effects. This is a versatile strain that speaks of its great hybrid mix of sativa and indica lineage as many users have sung praise in forums online. But for the most part, this is an indica-dominant that has garnered much of its accolades for its solid showing of relaxation, calming effect, and restful sedation.

It’s relaxing and calming effects are what makes the Paris OG that favorite that it is. It’s helpful for people looking to wind down after a long workday or workweek. These sedative effects are perfect for easing the user into a restful night’s sleep. For that reason, Paris OG is the perfect option for late day or night time use as this strain can even cause a couch lock for some and disable them from getting anything done.

Apart from that, Paris OG exercises its versatility in its other beneficial effects. Many have claimed that Paris OG provides a rather heady high along with a healthy dose of mental stimulation and mood-boosting effects. This strain is going to elevate your mood and leave you feeling like you’re on top of the world. These positive vibes are helpful as well for getting you through what is otherwise a mundane day. 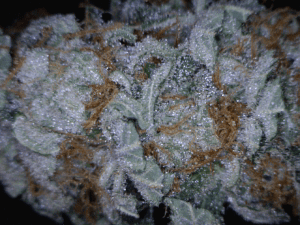 Though Paris OG is an amazing strain in itself, the experience may be a relatively rare one as this is a hard strain to come by. Paris OG is considered one of the more scarce strains out there and shops do not sell their seeds. Most of the time, the only plausible way to grow this plant is from clippings of a healthy mature plant. Even then, these clippings may be hard to come by themselves.

Otherwise, the Paris OG is a relatively easy strain to grow. It’s even convenient to grow this plant indoors, as it is a short and bushy plant perfect from small spaces. If you prefer, you can also grow the Paris OG outdoors especially in areas with relatively stable humidity or those resembling Mediterranean climates. Regardless of your chosen location, the plant will benefit from regular trimmings to optimize its growth.

For the persevering cultivator, Paris OG provides a wonderful treat. For indoor grows, the flowering time can occur anytime between 8 to 9 weeks. The yield for the harvest of this amounts to 12 to 16 ounces per square meter. For those who opted for outdoor growth, flowering usually can occur midway through October yielding an abundant harvest of approximately 20 ounces or more per plant.

The Paris OG, it seems, was created with the cannabis-enthusiast in mind. Offering a wonderful mix of calming and uplifting effects, those looking for a formidable strain to facilitate that “kick back and relax” mantra are sure to find just that with the Paris OG.

This is also a very social strain so a group of friends looking to maximize the social potential of a group’s night out can improve that with the Paris OG.