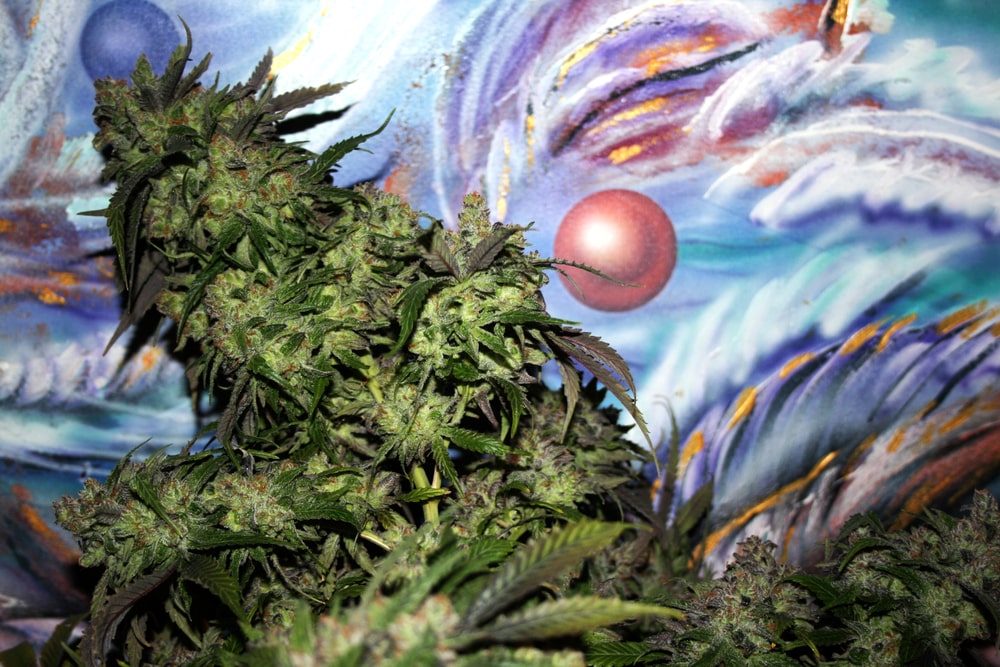 Despite having one of the most common names in the food service industry, this strain isn’t one you’re likely to find on the shelves of your favorite dispensary. Flo is a fun, collected, and easy-going hybrid herb that once won the top spot in the Cannabis Cup for overall best strain. And that comes as no surprise, especially since the variety brandishes a parentage of landraces that give it an intense genetic profile that really just brings it users to their knees.

Light, energetic, and clarifying, the Flo strain is a quick-fix kind of strain that can turn around your mood in a blink. Its mild numbing effects and its ability to clear away cognitive unpleasantry make it a great pick if you’re just hoping to get rid of an episode of bad juju that might be dragging down your day.

The Origins of the Flo Strain

The Flo strain combines chemistry from a prominent, popular, and somewhat overused landrace with enigmatic sativa of even murkier origins. Welded together, these herbs clash in terms of flavor and effects, thus Flo’s hybrid genetics. But even then, one parent seems to shine through in terms of dominance, putting Flo much closer to the sativa end of the range by a ratio of 80 to 20.

The Afghani landrace is perhaps one of the most heavily utilized landraces when it comes to breeding new cannabis strains. This herb – one of the earliest known varieties of cannabis occurring in the wild – touts intense, resinous production that releases strong earthy flavors and aromas that shed light on the kind of potent chemistry that the strain contains. In terms of effects, it’s mostly used for its ability to target discomforts like stress and bodily aches and pains.

To create the Flo strain, this Afghani parent was crossed with the Purple Thai – a variety of cannabis with very little prominence of the commercial market. Its own parents are enigmatics in their own right, but the herb doesn’t let its relative anonymity pull back its authority. The strong sativa comes out kicking with a fluster of energetic zaps that impact socialization, productivity, and mental activity. Only hit this stuff if you’re looking for a good time. 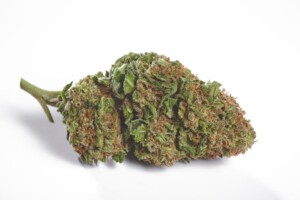 First impressions of Flo might make you think you’re looking at a rancid piece of overaged cannabis. Its mellow yellow and deep purple colorway give it a look that might earn a few raised eyebrows from unassuming onlookers. Needless to say, it might look like something old Fido might cough up after a day in the forest. Its pale yellow, blended together with deep tones of violet, purple, and brown aren’t exactly enticing, but she definitely makes up for it with her exaggerated trichome coating.

The ultra dense layer of trichomes that covers the surfaces of the Flo strain gives it a really hazy, sleepy exterior. But more than that, it covers up the odd colors which could give the strain a little more value in the eyes of a less experienced cannabis buyer. These trichomes – glistening with the sweet, sticky nectar that the herb is coveted for – adds a dreamy touch to the bud’s overall aesthetic.

If you know that there’s always more to cannabis than meets the eye, then a well-deserved whiff might be next on your list of things to-do when inspecting the Flo variety. And sure enough, its intense aroma doesn’t disappoint. Strong notes of pine and mint shoot from the leaves and rise through the nostrils. Underneath, tones of earth and sandalwood weave through for a dynamic, organic aroma that’s unlike many of the strains on the market that aim too hard for fruity floral.

When lit and taken as smoke, the Flo strain’s taste is a replica of its fragrance. Earthy overtones dominate the entire encounter, with clarifying hints of mint and chamomile coursing through the overt foreground. Towards the end of the exhale, the smoke takes on a mild diesel flavor that can scrape the throat as it makes that final exit. But then again, it’s really nothing even the lowest tolerance users can’t handle.

As the chemistry roams through your bloodstream, it starts to impart its beneficial effects to the user. For the most part, Flo is beloved by its patronage for its strong effects against ill feelings of apprehension and distress. That said, the Flo variety makes the ideal defense against cognitive discomforts that might push you to withdraw from daily activities and socialization.

But it doesn’t stop there. The Flo strain gives a jolt of extra energy that can encourage social interactions – an attribute acquired from its Purple Thai parent. Productivity and cognitive activity are also supercharged, giving you a free flowing supply of happy energy that doesn’t feel out of control or overwhelming.

The resinous Flo nugs are rich with nectarine goodness that trickles from its leaves, making it a common choice for farmers who want to produce canna-based products from their harvest. It takes about 7 to 9 weeks to reach maturity from the seed, and produces roughly 6 ounces of bud for every square foot of its growth. Be careful to manage its environment however since the Flo plant has been known to be prone to a range of cannabis plant diseases. Growing it indoors might be the best option if you’re out for your plant’s best interest.

As an energy giving sativa, the Flo strain is almost always the go-to for users who struggle to find the motivation for their day to day life. In the same light, people who feel like they already have an excess of vigor – and those who might be prone to problems with apprehension and worry – might find the Flo variety to push them over the edge, which is why they might be better off with a different strain all together.