Named after the legendary Casey Jones – a train engineer who risked his life to save his passengers – the Casey Jones Cannabis strain comes chugging like a freight train. The powerful sativa isn’t quite as prominent as others on the market, but makes its mark with a high energy start that dials down rapidly to a slow and steady indica-like ending that perfectly encapsulates just what happened to good Engine No. 382 in the early hours of April 30, 1900.

Building you up to a creative crescendo, the Casey Jones strain can bring you to the height of motivation and productivity as it reaches its peak. But as its effects start to settle, and its powerful sativa impact starts to change and morph into a delicate indica ending that can definitely become the perfect cap to several hours of uninterrupted productivity and movement.

The Origins of the Casey Jones Strain

Casey Jones is the lovechild of two relatively unpopular parents, one of which has yet to even make an appearance in a vast majority of dispensaries the world over. Nonetheless, they come together to produce impressive sativa that inherits both flavor and intricate chemistry from its low-key ancestors.

The first parent – East Coast Sour Diesel – is a heavy sativa with a 90-10 dominance. Its peppery, spicy flavor caresses the tongue, tinged with hints of herbal mint and oregano, as well as the slight twang of lemon. As a powerful sativa, the East Coast Sour Diesel strain produces unencumbered crystal clear focus and an intense attention span that can zero you in on whatever task you have.

The second parent in the mix is the little known Oriental Express. The child of Trainwreck and Thai, Oriental Express is one of those strains you’re not likely to find on a store’s shelf. With both of its parents leaning heavily on the sativa side, Oriental Express brings the same effects to the table, all wrapped up in blissful citrus goodness that leaves a twang of orange zest on the tastebuds. 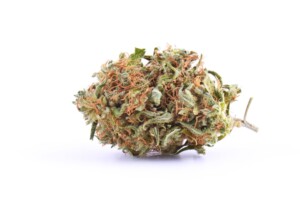 Unruly and unkempt, the Casey Jones herb looks more like a forest monster’s spawn. The spindly orange hairs that project from its leaves reach out and create intricate and rebellious look, making the herb stand out among others on the shelf. With leaves that tout every hue on the green spectrum, some samples also brandish hints of purple, pink, and blue that add a touch of distinct dramatic effect.

With the alien-esque, otherworldly clusters contained in jars, the allure to take a whiff becomes an undeniable urge. And as you crack open the container, the aroma of lemon and gasoline comes charging out with the full intention of knocking you out.

Neither of the scents are stronger than the other, and both come at your olfactories with the full force of a runaway train. And while the pleasant, tangy lemon might make you want to pull closer, the skunky diesel scent can also make you want to pull away, paving the way for a sensory tug of war that can have you sniffing for hours.

That first, smoke-filled puff will produce pretty much the same taste as the strain’s aroma. Powerful and contrasting, the flavors of citrus fruit and skunk can swirl together to create an almost-delicious taste that’s both enticing and deterring. For the more seasoned veteran, the back-and-forth between these two distinctive flavors can be a fun encounter, playing with the taste buds for a truly unique Cannabis encounter.

But for many unassuming novices, the tug of war between lemon and diesel can be something of a diversion, taking your attention away from the strong sativa effects that come with the strain. As the chemistry is infused into your blood stream, Casey Jones picks up to top speed and imbues your body with the full power of sativa dominance. The rapid elevation to a heightened sense of clarity and focus can make you want to get things done, helping you move from task to task in record time.

At the height of the experience, the euphoria can be a tad uncomfortable for rookies, but definitely not out of control. The elevated creativity and productivity can feel slightly uncontrolled if you don’t really have a lot to work on, so it would be best to prepare a day’s worth of work to make the most of the sativa effects. And of course, the rapid descent into a sleepy indica state comes hours after that initial sativa encounter, making it the perfect cap to an otherwise productive day.

Casey Jones is a fast-finishing modest-yield herb that can be relatively easy to grow. Capable of fighting off a vast array of cannabis plant disease, this herb can be grown outdoors with little supervision. As a sativa, it does grow pretty tall, with some crops reaching up to 6 feet in height or more. Nonetheless, since it is a sativa with widely spaced branches and leaves, topping might not be necessary.

For every square foot of the plant, you can expect to harvest around 3 ounces of bud, which isn’t a lot, but is definitely suitable for the needs of a Cannabis-head and a few of his buddies. And because it finishes in just around a month and a half, the strain makes up for its modest harvest with quick growth that lets you cultivate more than once a year.

Powerful to start, then soothing and calming at the finish, the Casey Jones strain can be the ideal herb for users who need the extra boost to get work done, but don’t want to be left hanging at the end of the encounter.

Lulling you off to a sleep stupor after several hours of uninterrupted productivity, Casey Jones can be the antidote for both unmotivated workers and for individuals who just can’t seem to put thoughts of work and productivity to rest at the end of a hectic work day. Novices are cautioned however to manage their doses, since the buildable effects of Casey Jones do intensify exponentially with each toke.