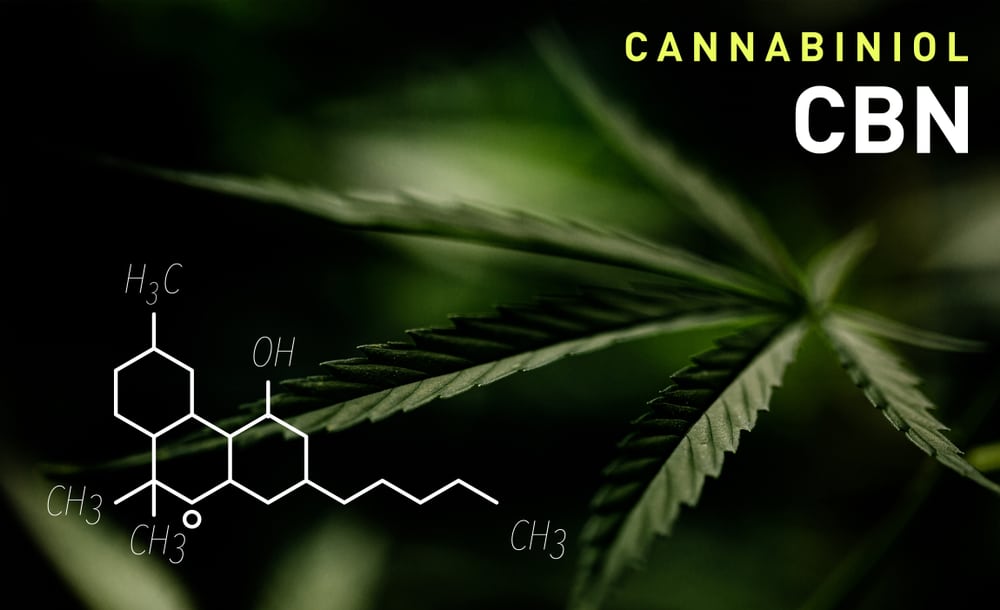 When cannabis fans chat about CBN, odds are they aren’t referring to Pat Robertson’s TV station. Instead, tokers who mention CBN are most likely referring to a fascinating secondary cannabinoid called “cannabinol.”

Throughout much of the 20th century, CBN has been at the center of a lot of speculation in the cannabis community. Interestingly, many scientists initially believed CBN was weed’s primary psychoactive compound. For some reason, early studies were only able to successfully isolate CBN rather than THC. Also, since CBN is related to THC, it was difficult for early scientists to tell the difference between them.

As cannabis cultivators should already know, CBN is an oxidized form of THC. Therefore, if you deliberately harvest any cannabis strain late in the season, it will have more CBN than THC.

Despite this connection with THC, most scientists argue CBN has relatively little psychoactive potential. However, that hasn’t stopped pot fans from suggesting that CBN has sedative properties. Indeed, the best-known rumor about CBN is that it intensifies a cannabis strain’s “couchlock” effects.

Honestly, nobody knows for sure whether CBN induces sleepiness. While CBN seems to have many potential uses, it’s too early to claim anything with scientific accuracy. Like every other cannabinoid, CBN appears to affect each person differently. Anyone new to CBN should start with a low dose of their CBN strain and gradually work their way up.

Speaking of CBN strains, it’s getting easier to find cultivators who deliberately harvest late in the season to increase CBN content. Technically, any hemp or marijuana strain could have a high CBN content—it just depends on when a grower chooses to harvest them. However, some cannabis hybrids seem to have elevated CBN levels regardless of when they’re harvested. Here are a few hybrids worth keeping in mind if you’re hungry for high-CBN hemp.

If good old GSC isn’t putting you to bed, then you may want to try its descendant Animal Cookies. Supposedly a blend of Girl Scout Cookies and Fire OG, Animal Cookies has the sweet flavors tokers associate with the Cookies lineage, but with an “indica bump.” While Fire OG certainly adds some chill, many tokers believe Animal Cookies has a sizable concentration of CBN.

Whatever the truth may be, there’s no question Animal Cookies is a nice nighttime treat. People who want a mix of sweet cookies and earthy dankness will love lighting some Animal Cookies after dinner.

There’s still dispute over how Blackberry Kush was created, but most people assume it’s a mix of the original Blackberry strain and a little landrace Afghani. Interestingly, this combination seems to have affected Blackberry Kush’s CBN count.

With an average CBN content above 2 percent, Blackberry Kush has a more decisive sedative kick than regular Blackberry. It won’t take too many hits from a bong filled with Blackberry Kush to send you to sleep. Tokers who are already fans of fruity-forward strains like Blueberry will enjoy adding Blackberry Kush to their nighttime routine.

Of the many OG Kush phenotypes flooding the market, Tahoe OG remains one of the top-tier cultivars. Unlike its legendary parent, this pungent pheno is nearly 100 percent indica with at least 1 percent total CBN content. While that CBN percentage may seem small, it could have a big impact on Tahoe OG’s effects.

True, Tahoe OG’s high limonene and alpha-pinene content may induce euphoria; however, those energizing effects are usually short-lived. After a few minutes, you should feel ready to settle down on the couch for a long nap. Tahoe OG is an excellent choice for tokers who want a more body-heavy OG Kush experience.

Forget flambéing a DIY Bananas Foster; Banana OG hybrid has all the creamy flavors you crave without the calories! Anyone who loves bananas, vanilla, and cinnamon will be right at home grinding Banana OG into their bong.

As a plus, this blend of OG Kush and Banana tends to have above average traces of CBN. But unlike other CBN strains, Banana OG‘s effects are comparatively mild. Don’t get us wrong; you’ll probably feel sleepy after taking a heavy dose of this dessert strain. However, if you microdose Banana OG, it’s likely you’ll feel a relaxing—but not overwhelming—head buzz.

Much to the dismay of Alice Cooper fans, there’s no indication Mr. Nice was named after the rocker’s famous single. Also, smoking the Mr. Nice strain doesn’t pair well with listening to Cooper’s raucous anthem. Indeed, this indica-heavy strain has become quite popular for its “mellowing out” effects.

It’s not uncommon for Mr. Nice strains to have CBN content well above 2 percent. To complement these soothing effects, Mr. Nice also has pleasing floral aromatics often likened to a well-manicured Japanese garden. So, if you want a little zen before bed, Mr. Nice may be your best bet.

Like White Widow or Gorilla Glue #4, Platinum Kush is one of the many strains named after its dense coating of trichomes. Reputed to be a cross between Master Kush and Afghani, this uber-sticky strain has all the traits you’d expect from something in the Kush lineage. Tokers should prepare for a predominately earthy toke with subtle hints of fresh fruit and hash.

Like most Kush strains, Platinum Kush has a near 100 percent indica profile. The above-average CBD and CBN content helps tame THC’s psychoactivity. These factors make Platinum Kush a good choice for people who want a soothing late-night draw. All in all, Platinum Kush is a great strain for people who love dense nugs, relaxing effects, and authentic Afghani aromatics.

ReCon is one of the few CBN hybrids that’s not associated with sedation. Once you get a whiff of these citrus-forward flowers, you’ll see why most people feel buzzed after smoking ReCon buds.

Although ReCon has a slight indica edge, these relaxing effects aren’t as apparent as other CBN-rich strains. Plus, ReCon’s pungent parents—Cannadential Citrus and LA Confidential—give it an enlivening diesel flavor. So, if you’re curious about using CBN during the daytime, ReCon may be the strain for you.

Get All The CBN You Crave On IHF

As more cultivators cater to the alternative cannabinoid market, finding flowers with above-average CBN content should get easier. However, smokable products aren’t the only way customers could experiment with CBN. Indeed, people who are interested in giving CBN a test should take a peek at IHF’s purified CBN extracts. Whether you prefer isolate powder, distillate, or oil, you can find a hemp-based CBN concentration in our online portfolio.

For more info on our products or wholesale opportunities, please feel free to contact IHF’s team at sales@industrialhempfarms.com.

George Mouratidis
George Mouratidis at IHF LLC Expert Cannabis/Hemp Author
George Mouratidis works as a full-time copywriter and journalist. He is the founder of WeedCopywriter.com, a bespoke content writing agency for the cannabis industry. George is a regular editor for many industry publications, as well as corporate blogs. He is also the co-writer of the book Ganja Hustle; a hit cannabis growing guide for the USA and Canada markets. When he is not writing, George likes to work out, trying new foods and playing with his cat. Currently, he lives in Greece.
Latest posts by George Mouratidis (see all)
Get All The CBN You Crave On IHFIHF's Best CBN Cannabis StrainsSeven Soothing CBN-Rich Cannabis Strains